TO THE UNITED STATES DEPARTMENT OF STATE

It is with a deep regret that we are informing you about the heads of a newly created Orthodox Church in Ukraine dependent on the Constantinople Patriarch who haven’t stopped their aggressive, raiding and illegal actions against believers of the truly independent Ukrainian Orthodox Church of the Kyiv Patriarchate and persistently continue their non-Christian, unlawful policy of confrontation.

This happens under the guise of full support of the US Department of State on all the above-mentioned unlawful actions of the OCU leadership.

On January 30, 2019 the registration of the UOC KP was canceled by the Ministry of Culture of Ukraine, and on December 13, 2019 the activity of the Kyiv Patriarchate as a legal entity was unlawfully terminated without any consent of its head Patriarch of Kyiv and All Rus-Ukraine Filaret and despite the decision of the UOC KP Local Council from June 20, 2019 on the continued existence of the Church.

The last year has already brought us a number of shameful specific facts of Ukrainian Orthodox Church of the Kyiv Patriarchate persecution that is aimed not only against the Church, as a legal entity, but also against separate people (Article 24 of the Constitution of Ukraine states that citizens have equal constitutional rights and freedoms and are equal before the law; there shall be no privileges or restrictions based on religious beliefs). It is to be recalled that at the order of the head of the Orthodox Church of Ukraine Metropolitan Epifaniy students of the Kyiv Orthodox Theological Academy (KOTA) were forbidden to perform duties of subdeacons in St.Volodymyr Patriarchal Cathedral of Kyiv, to serve near the Holiest Patriarch of Kyiv and all Rus-Ukraine Filaret.

From the very beginning of the OCU formation with the aim to create an information blockade an immediate circle of Metropolitan Epifaniy has blocked the official website of the UOC KP and social media pages of the Church and Patriarch Filaret without any warning. There was a direct interference with the right to freedom of thought and speech (guaranteed by Article 34 of the Constitution of Ukraine). Since then, false information and outright slander has been spread on Primate of the UOC KP.

According to the orders of the OCU leaders the students of KOTA serving in St. Volodymyr Cathedral have been unlawfully suspended from the studies.

The leadership of the Orthodox Church of Ukraine does not disdain to resort to primitive revenge that is unchristian. Thus, a graduate of KOTA and a servant of the Kyiv Patriarchy Gennadiy Pogorelov, who as an orphan had been living in St. Feodosiievskiy stavropihiiniy monastery for more than ten years and having no other place to live, was moved out, so as to say – on the street.

Meanwhile, according to sociological polls of the Razumkov Foundation, even in the face of outright state discrimination and persecution 7.7 percent of the citizens called themselves the UOC KP adherents last year. Hence, the UOC KP is ranked fourth among the major Ukrainian affiliations after: the OCU – 13.2 percent, the UOC MP (the Ukrainian Orthodox Church of Moscow Patriarchate) – 10.6 percent, and the UGCC (the Ukrainian Greek Catholic Church) – 9.5 percent. The faithful of the UOC KP is a big part of citizens of our country who have equal rights with all others to belong to the affiliation they prefer. The mentioned right is guaranteed by Article 35 of the Constitution of Ukraine and international legal acts.

The question that arises here is: What kind of Christian benevolence and help did Metropolitan Epifaniy talk about during the recent Meeting of Orthodox Youth after having deprived a young believer of shelter? The only thing these people may be blamed for is remaining faithful to their native Church and to its Primate – Patriarch Filaret. How can Metropolitan Epifaniy speak of “creating the future together” when he so shamelessly breaks the fate of young people only because they have love and faith in their hearts? Unfortunately, it has been a long time since the OCU leadership forgot the words of Holy Scripture: “Do not seek revenge or bear a grudge against anyone among your people but love your neighbor as yourself.” (Lev. 19:18).

In public, Metropolitan Epifaniy cunningly speaks about love to his spiritual master Patriarch Filaret while taking away from him the Kyiv eparchy and property, trying to intimidate the immediate environment, feeding the media with abusive gossip. The OCU is proclaimed to be “an open church for everyone” that in practice resorts to raiding, threats, harassment and blackmail. Goal of Metropolitan Epifaniy and his associates has become clear – to destroy the UOC of the Kyiv Patriarchate, to fully appropriate the property and force its adherents to join the OCU.

Why now, with a new Ukrainian government that as promised is supposed not to intervene in church affairs after declaring a constitutional principle of church and state separation, the rights of the Ukrainian Orthodox Church of the Kyiv Patriarchate are systematically violated? It is unfortunate to admit, but it turns out that another wave of the OCU aggression against a truly independent Ukrainian Church – the UOC KP began after two meetings of Metropolitan Epifaniy and the US State Secretary of State Mike Pompeo took place. Unfortunately, the US public support has been perceived by the OCU leaders as an opportunity to commit unlawful acts, stir up inter-affiliations religious hostility in Ukrainian society, to violate the rights of believers to the freedom of conscience, to forget about Christian laws and the simple human conscience.

It is well known that human rights and democracy are fundamental principles for the United States of America. They are recognized as sacred and unchangeable. The very first amendments that became a basis for the Bill of Rights (USA) adopted in 1789 referred to freedom of religion. Every year the US Department of State – Bureau of Democracy, Human Rights and Labor publishes an annual special report “Advancing Freedom and Democracy” (“Supporting human rights and democracy”). Therefore, it is unfortunate to admit that such a large country as the United States, which stands for the rights and freedoms in the world, may be used to violate them in Ukraine.

As a matter of fact, the good attitude of the United States as a strategic partner of Ukraine has been used in an unfair and cunning way to commit violations of the rights and freedoms of our citizens. It is through the speculation on the support of some influential circles in the United States that Metropolitan Epifaniy and his OCU environment made it possible to cancel legal registration of the Ukrainian Orthodox Church of the Kyiv Patriarchate with the help of former government representatives.

Under this pretext, referring to the US Department of State’s support of the OCU the new government is contributing to the continued human rights abuses with its unwillingness to renew our Church’s registration.

At the same time, Ukrainian unreformed and corrupt courts, given the political conjuncture, did not dare to proceed with an objective examination of the cases and claims as for the unlawful liquidation of the Kyiv Patriarchate as a religious center of the UOC KP. This is also a direct violation of Art. 55 of the Constitution of Ukraine which states that human and citizens’ rights and freedoms are protected by the court, and everyone is guaranteed the right to challenge in court the decisions, actions or omissions of bodies of state power.

On June 20, 2019 there was held the Local Council of the Ukrainian Orthodox Church of the Kyiv Patriarchate that confirmed its existence as a religious organization. Unfortunately, representatives of the Ukrainian state bodies, in particular, the Ministry of Culture of Ukraine, have refused to register this resolution so far. This is done despite the fact that the activity of the UOC of the Kyiv Patriarchate is guaranteed by Art. 35 of the Constitution of Ukraine, Art. 18 of the Universal Declaration of Human Rights, Art. 18 of the International Covenant on Civil and Political Rights, Art. 9 of the Convention for the Protection of Human Rights and Fundamental Freedoms, by the provisions of the Law of Ukraine “On Freedom of Conscience and Religious Organizations”.

Due to this situation, Ukraine’s image in the international arena is damaged. Now we are not only perceived as a corrupt country, but also as the one where basic human rights are violated, where the Churches are liquidated following example of totalitarian states ruled by dictators. Meanwhile, according to the Constitution of Ukraine and international law all religious affiliations in Ukraine should enjoy equal rights. The violation of fundamental human rights in Ukraine may be used to the benefit of Russia.

In October 2019 Metropolitan Epifaniy presented the Metropolitan Foundation of the OCU in Washington. According to the official statements the OCU Foundation expects the United States of America to be its main financial donor. We would not wish the American taxpayers to be misled by Ukraine and their money to become a fund for a systematic violation of human rights to freedom of conscience. We would not wish the OCU to continue persecution of the faithful of the UOC KP through this fund. We are confident that US citizens will never agree to that either.

Based on the foregoing, we appeal to the leadership of the United States of America (the US Department of State in particular) to consider how their good intentions to preserve our sovereignty, territorial integrity and democracy is being negatively used in a speculative way.

We kindly ask you to support the faithful of the Ukrainian Orthodox Church of the Kyiv Patriarchate in enforcement of their legitimate rights to freedom of conscience and religion, to help renew the state registration of our Church.

We also ask the US Department of State to carefully examine all facts of violations of the rights to freedom of conscience and religion of the faithful of the Ukrainian Orthodox Church of the Kyiv Patriarchate, to respond to the oppression of the UOC KP by the OCU and to include these facts to the annual report of the US Department of State on human rights in the world – “Advancing Freedom and Democracy”.

We trust that the USA is not the state to be used in intrigues designed to adversely affect the rights of one religious affiliation for the benefit of others.

With the support of international partners, and, first of all, the United States as a strategic partner and friend, Ukrainians have to build a democratic state where every citizen feels free and equal. For this is the way God created us to be.

Press-service of the Kyiv Patriarchate 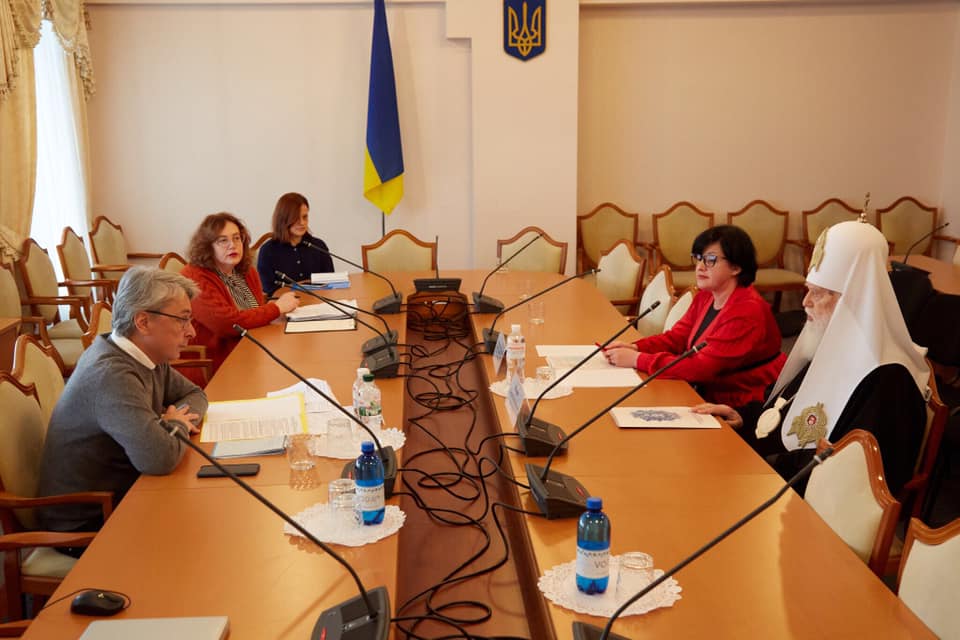 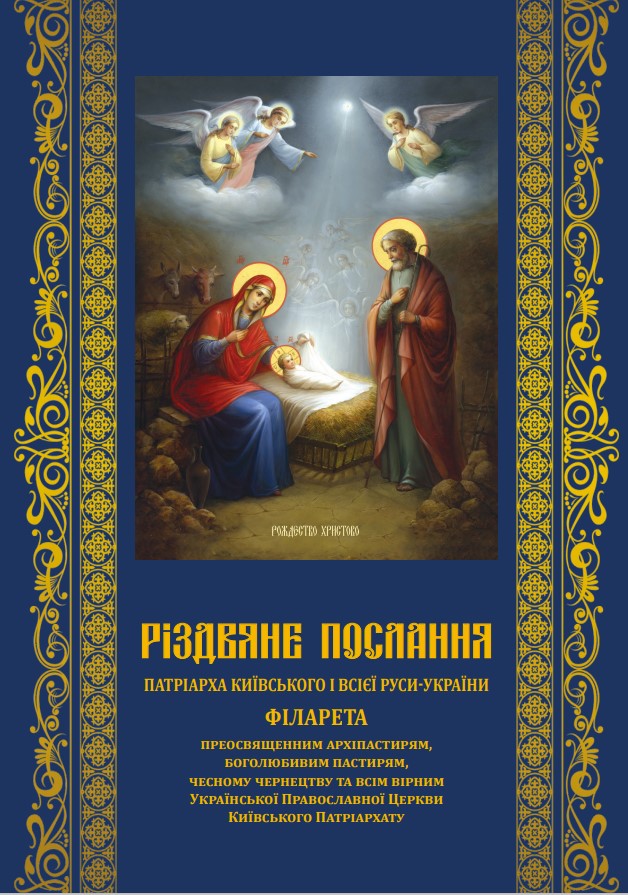